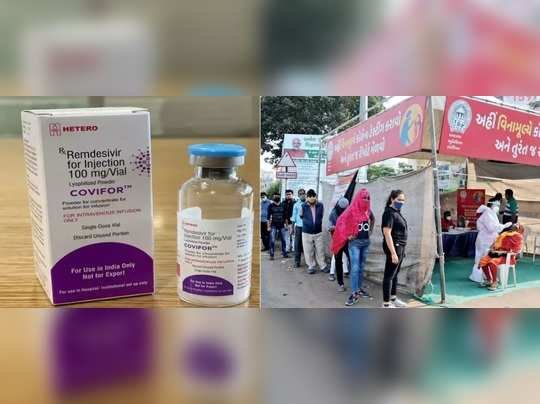 Amid states grappling with stretched Covid facilities and vaccine shortage, Rajasthan and Andhra Pradesh chief ministers sent SOS to the Centre regarding vaccine supply on Friday, even as more inoculation centres were shut in Maharashtra, taking their total count to 592.

There were also reports of shortage of Remdesivir that is used to treat Covid patients, in Maharashtra, Gujarat, Karnataka and Madhya Pradesh.

Seventy-five of the 120 centres across Mumbai, including a jumbo facility in the Bandra Kurla Complex that was inoculating 4,000 people daily, halted vaccinating people on Friday as supply dried up.

“We have been asking the Centre to ramp up the supply, but there is no positive response. To set up a centre, we spend a lot of money on infrastructure and engage many trained people. Shutting down the centres is a big setback to our vaccination drive,” said a senior health official in Maharashtra.

In Rajasthan, the vaccine stock will last only two days, Chief Minister Ashok Gehlot said in a letter to Prime Minister Narendra Modi, and sought immediate supply of 30 lakh doses to ensure smooth continuation of the inoculation drive, particularly during the ‘tika utsav’ proposed by the PM.

With hospital beds filling up and demand for oxygen growing, supply is drying up in some states. Maharashtra CM Uddhav Thackeray has already stated that the state is in “dire need” of oxygen of 1,700-2,500 MT oxygen by April-end.

Long queues at pharmacies for Remdesivir

In Madhya Pradesh, there were reports about deaths of Covid patients due to lack of oxygen at government hospitals in Sagar, Ujjain and Khargone, though the State government denied it. As for Remdesivir, Maharashtra Chief Minister Uddhav Thackeray expects a demand in his state of 90,000 to 1 lakh vials by the end of April while the current stock is 50,000 to 60,000 vials.

In Gujarat, cities like Ahmadabad had people lining up before the medical stores for Remdesivir, as the injection is in short supply. In Madhya Pradesh, Indore and Bhopal reported shortage of Remdesivir.

Long queues outside pharmacies were seen in Indore’s Dawa Bazar area for it. Sources said the MP government had ordered 20,000 vials of Remdesivir, but got only 2,000.

As for Karnataka, while the official position was they were adequately stocked, sources said it is not available in most private hospitals and the drug is being sold on the black market for Rs 4,000.

However, Odisha, Kerala, Tamil Nadu, Telangana and Andhra Pradesh have reported thst they were comfortable with their Remedisivir stock position.

In Karnataka, sources said that the drug is not available in most private hospitals and is being sold on black market for Rs 4,000.

The availability of Randesivir worsened after the Government controlled the direct sale of the life saving injection. The situation is at its worst , when the hospitals are given about 30% less injections against the list of patients produce by the hospital administration to get the injection stock. Due to this the patients are facing problems.

The situation is same in Ahmedabad, Vadodara,Surat,Rajkot and every small or big city of Gujarat. The government has completely failed in providing the injection to patients.

Talking to The India Post , a hospital administrator said, during the treatment of Covid patient,half course of Randesivir is risky. We have been requesting to local authorities to give one year injection per patient, who are undergoing the treatment, but they are providing 35% less stock ,so how can a hospital discriminate between the patients in giving the injection. While the Gujarat Government is absolutely clueless as to how to overcome the scarcity.