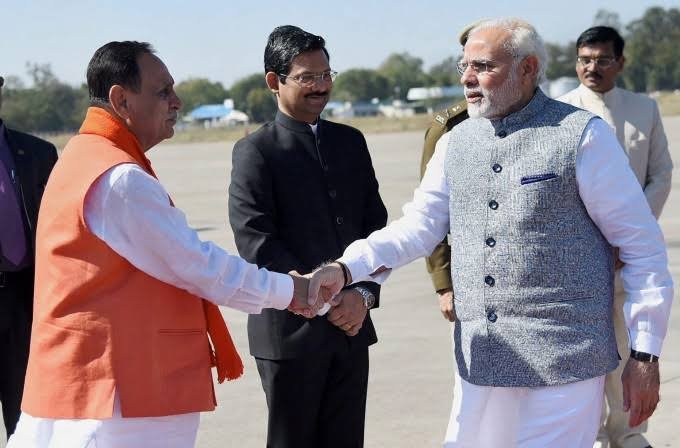 Vijay Rupani resigned as Chief Minister of Gujarat on Saturday evening in an unexpected move ahead of elections in Prime Minister Narendra Modi’s home state late next year.

“… has been a five-year journey for development of Gujarat… under guidance of PM Modi. Now, to further develop the state, with new energy and power, I have decided to resign as Chief Minister,” Mr Rupani was quoted by news agency ANI.

“It is well known that the BJP, as a party, keeps changing as per requirements… it is a speciality of our party that every worker delivers his/her assigned job to the fullest, and I too will continue to work for the party with the same energy,” he added.

As per sources from the PMO, the name of the new C.M is likely to be announced on Sunday and the new C.M will take the oath by September 13 or 14th, 2021.

On other side as per NewsFirst , the ex rebel and ex Minister Gordhan Zadafia’s name is been discussed as the new C.M of the state. But other names are also competing Zadafia

5 Star
0%
4 Star
0%
3 Star
0%
2 Star
0%
1 Star
0%
(Add your review)
Previous post The Logo and identity of the Delphic Council of Maharashtra symbolises “WATER” as metaphor of Peace through the arts, as exemplified by the Delphic Games from the ancient times.

Dedicates the centre to the people of the region Vadodara, August 13, 2021: Huntsman, a global manufacturer and marketer of...