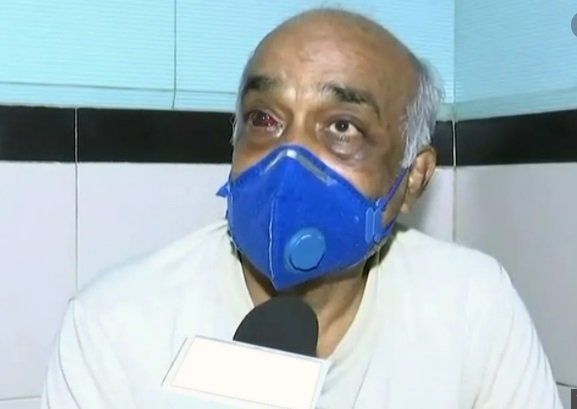 “I’m injured and stressed. What happened is saddening. I’d like to tell Uddhav Thackeray that if you can’t look after law and order then resign and let people decide who should look after it,” Sharma (65), a resident Lokhandwala Complex in Kandivali east, Mumabi, was quoted.

He said that the entire organisation of the Chief Minister and its workers should apologise for the act and should ensure that it will not happen to anyone. “All workers and organisations of Uddhav Thackeray ji should seek apology from the entire nation and ensure that such incident does not take place again with anyone else,” Madan Sharma told media.

Meanwhile, Union Defence Minister Rajnath Singh today spoke to the navy veteran and wished him a speedy recovery. “Spoke to retired naval officer, Madan Sharma who was attacked by hooligans in Mumbai and enquired about his health. Such attacks on ex-Servicemen is completely unacceptable and deplorable. I wish Madan ji a speedy recovery,” Defence Minister Rajnath Singh tweeted.

Earlier in the day, BJP leaders, and daughter of Madan Sharma staged protest outside the office of Additional Commissioner of Police demanding the accused to be booked under non-bailable offences.

On September 12, Shiv Sena leader Kamlesh Kadam and five others, all Shiv Sena workers, were arrested by the Mumbai police overnight after an FIR was registered in connection with alleged assault on retired Navy officer in Mumbai. They were granted bail later in the day

The incident happened on September 11 afternoon when a group of around 8-10 persons, all allegedly Shiv Sena workers, came and assaulted Sharma in his society compound. According to reports, the Sena workers had reportedly found the cartoon forwarded by Sharma as objectionable and attacked him.

Several BJP leaders, including Leader of Opposition Devendra Fadnavis slammed the Sena and ruling Maha Vikas Aghadi government for the attack, and demanded stringent action against the perpetrators.

Amid an alarming rise in Coronavirus caseload in Maharashtra, deputy Chief Minister Ajit Pawar on Friday warned that if people...

As the number of COVID-19 deaths continues to increase in India, five states including Maharashtra, Tamil Nadu have accounted for...

Actor Kangana Ranaut compared Mumbai to PoK and even Pakistan today as a civic team demolished alleged illegal structures at...

The Shiv Sena on Tuesday said it has appointed its Rajya Sabha member Sanjay Raut as the chief spokesperson of...

A day after a five-storeyed building in Maharashtra's Raigad district collapsed, the police has registered a case against five persons...