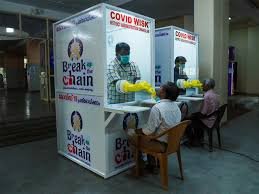 The centre on Thursday rejected Congress leader Rahul Gandhi’s allegation that the rate of coronavirus testing in India is low, and said as many as 24 people are being tested for one positive case to be found, which is more than several developed countries.

“In countries like Japan, one out of 11.7 tests turn out to be positive, which is among the highest in the world. Italy tests 6.7 persons for one positive test while the USA tests 5.3 persons and the United Kingdom 3.4,” ICMR’s Dr Raman R Gangakhedkar said at a press conference.

“Taking their population base into consideration, it is difficult to comment about our testing rate. In India, we are conducting 24 tests out of which one comes out to be positive,” he added.

He said since India has a huge population and not all belong to vulnerable groups, the testing ratio is not low.

Mr Gandhi on Thursday addressed the nation via video conferencing, and said the lockdown announced last month to check the growing number of coronavirus cases in India will not defeat the virus, which has killed over 400 people in the country.

“In no way does a lockdown defeat the virus. It helps only to stop the virus for a short while. The only way to do this is to increase testing,” he said.

He also said the testing levels in the country were “too low”.

The centre was earlier testing only those who were linked to foreign travel. However, earlier this month, it widened its ambit. Now people present in the hotspots, whether connected to the patients or not, will be tested if they are showing symptoms of the disease.

Prime Minister Narendra Modi had last month announced a nationwide lockdown to arrest the growth of coronavirus cases. The numbers of cases and deaths, however, are gradually rising – but not as rapidly as in the US and European countries.

The centre earlier this week said its lockdown strategy was working, and had it not enforced the lockdown, 8.2 lakh people could have contracted the virus by April 15.